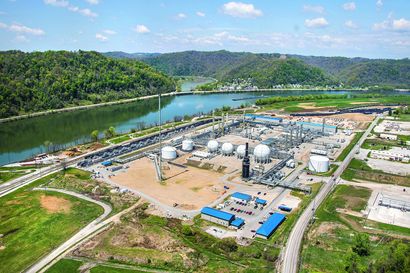 When Midland-based Rattler Midstream in May claimed the title of largest energy IPO of the year raising $665 million, this spinoff of Diamondback Energy showed it had serious bite in the Permian Basin. Reese Energy Consulting today is studying the next potential midstream monster of an IPO that would make the Rattler deal look like a common garter snake. Now, Dallas-based Blue Racer Midstream is exploring an initial public offering that could be valued at as high as $2.5 billion. Blue Racer’s “supersystem” is concentrated in Ohio and West Virginia where it gathers, processes and transports natural gas and NGLs from the liquids-rich Utica and Marcellus in the Appalachian Basin. With three complexes straddling two states, the company’s expansive network includes 700 miles of pipeline, 1 billion CFD of nameplate processing capacity, 134,000 BPD of fractionation capacity, and 12,500 BPD of condensate stabilization capacity. According to the EIA, the Appalachia region will supply 40% of the U.S. gas market by 2030. For Blue Racer, that’s winning a blue streak.

by reeseenergyconsulting
4
An Independent State of Mind