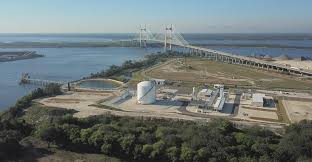 With the flurry of large-scale LNG projects currently underway, Reese Energy Consulting today is looking at the small-scale facilities that are finding new markets for this fuel on land and offshore. As recently as May, Pivotal LNG announced start-up operations of JAX LNG—the nation’s first small-scale waterside LNG production facility. Located at the Port of Jacksonville, Fla., JAX LNG offers both marine and truck-loading capabilities and produces 120,000 gallons of LNG per day with more than 2 million gallons of storage. The facility also is the long-term supplier to the world’s first LNG dual-fuel container ships. In addition to marine and trucking companies, JAX LNG is poised to serve other industries as well, including rail, drilling, mining, power generation, commercial and industrial. Exports to Puerto Rico and Caribbean countries are another growing market for small-scale plants. The industry isn’t exactly new, but more and more LNG companies are springing up with their own business models and proprietary technologies to address the growing demand and applications for LNG here and abroad.

by reeseenergyconsulting
5
No Longer a Pipe Dream for SCOOP Operators

Previous post No Longer a Pipe Dream for SCOOP Operators