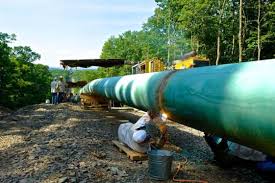 Pipeline Operators Go for the Gas

On news last Sunday that the Keystone Pipeline had experienced a third-party power hiccup reducing the output of crude originating from Canada, there was no shortage of opinions as to whether the ill-fated Keystone XL could have picked up the slack. Regardless, the nation’s largest pipeline operators now are focused on building or expanding new natural gas pipelines to meet increased production and higher demand.

Reese Energy Consulting today is following the latest predictions, foretelling more record-breaking gas volumes from the nation’s major basins. Overall gas output is expected in August to climb to a whopping 93 BCFD. Of note, the Marcellus/Utica in August is set to produce 35.3 BCFD. The Haynesville will enjoy an annual output of more than 14 BCFD and is forecast to reach 17.2 BCFD in 2023. Gas production in Appalachia is already hamstrung by pipeline constraints and could well be curtailed by the ongoing courtroom soap opera starring the Mountain Valley Pipeline.

But Permian pipeline projects with a destination to the Gulf’s LNG mothership like those announced by Energy Transfer and MPLX are set to take flight, with the latest news coming from Kinder Morgan which has greenlighted expansion on its Permian Highway Pipeline.

by reeseenergyconsulting
0
REC Is on the Grow Again